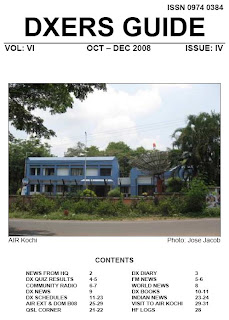 Now you will access this quarter 'Dxers Guide' from the following link
http://vaanoliulagam.googlepages.com/DGOct-Dec2k8.pdf
Kindly send your comments to
ardicdxclub (at) yahoo (dot) co (dot) in
For hard copy and subscription details contact the above ID

If you subscribe the hard copy of our Dxers Guide, then you will get the bonus copy of 32 pages B08 booklet. Also we cover DRM to Asia, DX Programme list and WRN Schedule in this booklet. All these things in one pack. The Great bonanza for enthusiastic Dxers in India. 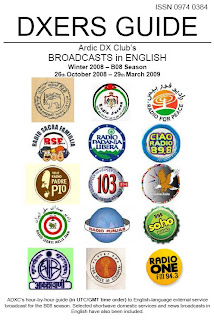 Posted by Jaisakthivel at 3:56 AM

All India Radio now start to send the new programme schedule to their listeners. If you not yet received, contact the following address: 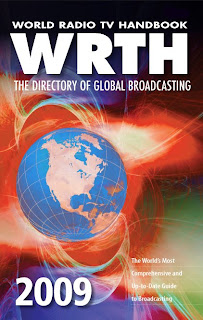 WRTH are proud to present the 63rd edition of the bestselling directory of global broadcasting on LW, MW, SW and FM.

The Features section this year includes an exploration of FM DXing, a tour of local All India Radio stations, our Digital Update, and completely updated SW transmitter site maps.

Features - This section is in full colour and contains reviews of receivers and ancillary equipment, articles on topical issues such as digital radio, interviews with broadcasters, reception conditions, colour maps showing the location of SW transmitters, and other topics of interest to Listeners and DXers. 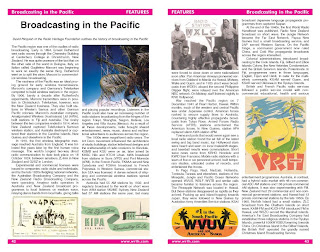 International Radio - Full details of all broadcasters transmitting internationally are given in this section and are listed by country. The schedules shown are the 'B' or 'winter' SW frequencies as supplied by the broadcasters and confirmed by monitoring, together with any LW or MW frequencies used. It also contains a sub-section showing Clandestine and Other Target Broadcasters arranged by target country. The 'A' or 'summer' schedules, along with updates to broadcaster details, are available as a pdf download from this website in May each year.

Television - The TV section has details of the main terrestrial national broadcasters, large regional networks, and some local stations, arranged alphabetically by country.

Visa or Mastercard (using a printed copy of the order form)

You are also welcome to mail your order and send payment by:

Posted by Jaisakthivel at 10:55 PM 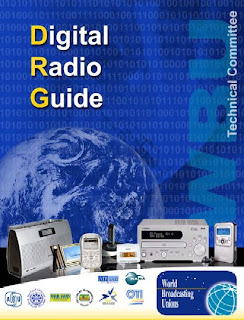 The ABU undertakes wide ranging activities reflecting the current needs of the members. These activities are implemented by the Secretariat's Technical Department. Providing technical information to the members is a major activity of the Technical Department. The activity takes various forms including the publication of the ABU Technical Review and regular distribution of clippings containing a selection of the most useful papers published in technical journals worldwide. Recenty they published the "Digital Radio Guide". It's give the introduction about the digital radio. Total number of pages 118. You will more info from the following link
http://www.abu.org.my/public/documents/DRG-2007-Final.pdf
Posted by Jaisakthivel at 9:14 PM

Snapshot on print and radio channel promotions on TV 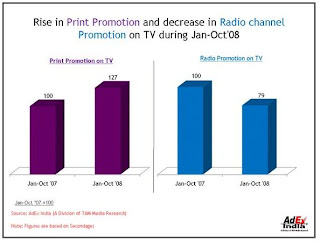 All India Radio's children and youth show 'Our Home, The Planet Earth' has won special commendation at the the Asia Pacific Broadcasting Union's ABU Prizes 2008, announced in Bali on 24 November 2008.

tandard, to raise educational and cultural levels, and to strengthen international understanding among the peoples of the countries and areas of the ABU members.

This year, the awards were presented at an awards ceremony held during the 45th ABU General Assembly in the Indonesian capital on 24 November.

Posted by Jaisakthivel at 8:54 PM

Email ThisBlogThis!Share to TwitterShare to FacebookShare to Pinterest
Labels: All India Radio, Our Home The Planet Earth 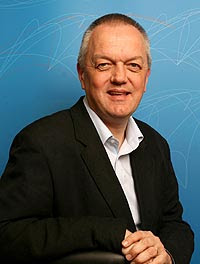 Nigel brings with him a wealth of experience and knowledge of global, multi-ethnic, and culturally diverse organisations.

He has worked for the BBC for more than 20 years and held senior management and editorial posts in television, radio and online, many with a strong emphasis on news and current affairs.

As Director of BBC World Service, he is responsible for the overall editorial leadership and management of the world's leading international radio broadcaster, BBC Arabic TV and its new media operations.

In addition to his World Service role, Nigel is also Chair of the BBC World Service Trust - the World Service's charitable arm, which uses communications and new technologies to aid development in some of the world's poorest countries.

Nigel is also no stranger to Plan. He has spent over 6 years working at the highest levels of the international Board and Members Assembly. He is currently the Chair of the UK National Organisation.

Paul Arlman, Chairman of Plan’s International Board said: “We are delighted to have someone with such a demonstrated dedication to international co-operation, combined with a great interest in the fate of children and enormous management experience in a complex organisation. Nigel will be a great asset and inspirational leader for the organisation.”

Nigel Chapman, who is married with 2 children, said: “I am delighted to be joining Plan Inter

national as its CEO. I know from my visits to see its work first hand, and my time as Chair of the UK Trustees, that Plan has a wonderful reputation for working with millions of the world’s poorest children and their communities and helping them escape poverty. It will be a privilege to lead the Plan team to what we all hope will be a new level of impact and achievement.”

As Director of BBC World Service, Nigel Chapman is responsible for the overall editorial leadership and management of the world's leading international radio broadcaster and its new media operations.

He has worked for the BBC for more than 20 years.

He has held senior management and editorial posts in television, radio and online, many with a strong emphasis on news and current affairs.

After joining the BBC as a trainee in 1977 he later produced and edited high-profile current affairs television programmes, including Nationwide, Newsnight (where he worked on the first evening programme in 1980) and Breakfast News.

He edited the series for almost three years until moving to the BBC's south region as Head of Centre, South East at Elstree in March 1992, where he was responsible for local television and radio, current affairs and political output in London and the South East.

In 1994, he was appointed Head of Broadcasting, Midlands and East, based at Pebble Mill, Birmingham.

In January 1999, he became the first ever Director of BBC Online, with responsibility for the development of the UK's most popular content website.

In September 2000, he was appointed Deputy Director of BBC World Service.

In that post he had responsibility for relations with the Foreign Office, strategy, multi-media, press, public affairs, marketing and legal affairs.

He deputised for the Director of BBC World Service across the full range of his functions.

He was Acting Director of the World Service from January 2004 to his current appointment in July 2004.

Nigel Chapman is married with two children and lives in Oxford.
Posted by Jaisakthivel at 8:35 PM 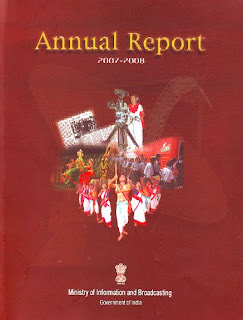 Annual Report of Ministry of Information & Broadcasting, Govt of India for
the year 2007-08 is now available for download from this link :

Email ThisBlogThis!Share to TwitterShare to FacebookShare to Pinterest
Labels: Ministry of Information - Broadcasting 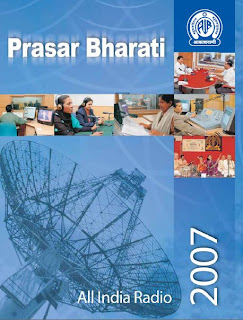 Annual Report of All India Radio for the year 2007 is now available for
download from this link :
http://allindiaradi o.gov.in/ reports/AIRComp2 007.pdf
(9.66 MB)

Annual Report for Prasar Bharati for the year 2007 can be downloaded using
this link :
http://allindiaradi o.gov.in/ reports/PBAR2007 .pdf
(20.6 MB)