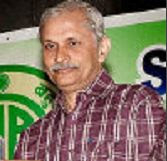 G Jayalal, deputy director general, All India Radio (AIR) has been promoted as director general of the country's premier audio broadcaster.
Jayalal, who was serving as deputy DG, programming, planning and development, took charge as new the DG last week. He has been appointed on a temporary basis.
The post has been filled after a gap of more than a year, since the tenure of last DG (AIR) Brijeshwar Singh had ended in May 2007. Singh, an IAS officer from the Tamil Nadu cadre, was a full-fledged DG of AIR.
B S Lalli, CEO, Prasar Bharati, had been handling additional charge as DG of both AIR and Doordarshan till recently. Information and Broadcasting ministry had earlier objected to a retired IAS officer holding charge of the DG of DD and AIR. Lalli, a retired IAS officer, was appointed as CEO of Prasar Bharati last year.
Subsequently, the ministry was sent a list of nominees for the two posts by Prasar Bharati, and Noreen Naqvi was appointed as DG (DD) on the basis of seniority, though her appointment too is on a temporary basis.
Jayalal's appointment has also been ordered on seniority basis. He joined AIR in 1978 and had served as station director of Tirunelveli, Port Blair, Puducherry, Thiruvananthapuram and Bangalore, before heading the southern zone of AIR stations as DDG.

Posted by Jaisakthivel at 10:14 PM

Received the following msg from Voice of Mongolia.

Dear all,The Mongolian National Radio in cooperation with the NationalCouncil for Foreign Advertisement and Cultural relations is announcing aradio quiz "Who better knows Mongolia"The quiz is announcing for a period of two months starting fromSeptember 15 until November15. The entries for the radio quiz would beconsidered by a joint selection commission of the above two organizationsand names of winners would be announced on December 1.Here are the questions of the radio quiz "Who better knowsMongolia"1. What do you know about the territory, population and national minoritiesof Mongolia?2. Since when Mongolia has been participating in the Olympic Games? Howmany Mongolian athletes and in what categories took part in the 29th SummerOlympic Games in Beijing? How many medals Mongolia won and what were thecategories?3. Some cultural and natural heritages of Mongolia are included in the UNESCOWorld Heritage List. What are they and why they had been put on the UNESCOlist?Three best entries would be selected to be awarded and there would also betwo special prizes.So tune to us, take part in the quiz and be a winner!Yours sincerely,Densmaa ZorigtMail editor of the

Email ThisBlogThis!Share to TwitterShare to FacebookShare to Pinterest
Labels: Voice of Mongolia 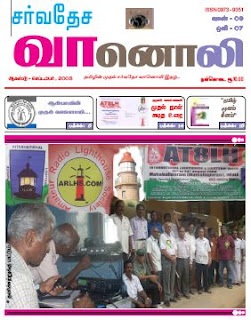 Tamil Monthly DX Magazine 'Sarvadesa Vaanoli' now available to read in the following link. Those who are want a hard copy of that magazine, contact Jaisakthivel - +91 98413 66086 http://vaanoliulagam.googlepages.com/augustlow2k8.pdf
Posted by Jaisakthivel at 9:58 PM