It is the first time that Radio Taiwan International English Service has held Listeners' Club meetings since it was restructured in 1998. RTI has received an increasing number of letters from South Asian region over the last six years, showing that more and more listeners in South Asia tune in to RTI.

When RTI made a decision to hold listeners' meetings in South Asia, the English Service had a debate over where the meetings would be held since RTI listeners are scattered all over India, Pakistan, Bangladesh, Sri Lanka and Nepal. After much consideration, RTI decided to go to Delhi and Calcutta (Kolkata).

48 listeners attended the RTI Listeners' Club meeting in Kolkata on Feb. 19, 2006. Two participants came all the way from Chennai which is some 1,600 kilometers away from Kolkata. Believe it or not, it took them two days to get to Kolkata to take part in the meeting and of course, another two days to get back. Some from Pakistan, Nepal and Bangladesh stated their willingness to take part as well. The meeting was held at the conference room of the Peerless Inn which is centrally located and is within a walking distance from the bus station.

The meeting was a tremendous success

The meeting began with a brief introduction of the three RTI personnel, Chairman Lin Feng-jenq, Vice Manager of Programming Department Wayne Wang and Carlson Wong, followed by the video presentation introducing RTI. During the Question and Answer period, listeners responded with constructive suggestions. The highlight of the event is that RTI announced the establishment of RTI Listeners' Club in Kolkata with the hope of bringing together listeners around the region.

The President of RTI Listeners' Club in Kolkata is Swopan Chakroborty.

We were overwhelmed with joy by the enthusiasm of RTI listeners in India and hope that it is a good start. After all, well begun is half done and we do hope to see our listeners soon.

We would like to remind our South Asian listeners that RTI has opened a post office box in Delhi (RTI, P.O.Box 4914, Safdarjung Enclave, New Delhi, 110029, India) for years to help you save postage So write to us!

The President of the Club is Mr.Swopan Chakroborty. Mr.Chakraborty is also one of the two RTI official monitors in India. 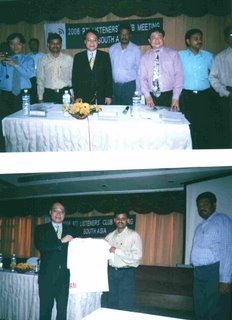 The 18th International DX Contest "The Grand Tour with Cancer and Capricorn" contest runs from Friday 24th March, 1800 UTC, to Sunday 9th April, 2400 UTC. It is open to all shortwave listeners regardless to their membership in any DX club.

Primary contest frequencies are from 2300 to 26100 kHz. Logs outside this range will be valued by half points.

Each participant will receive a contest diploma with his/her classification and a list of paricipants with their results. The first three participants will be awarded non-cash prizes; three additional prizes will be drawn into all participants regardless to their scoring.

In Part 1 listen please to any BC station of the contest country, for 15 minutes at least. For one country one log only. Unofficial, pirate and clandestine stations are not allowed.

Scoring: 1000 points of each logged country will be divided by a number of logs and rounded to two decimal places. Maximum point value 200 points for one country.

In Part 2 you can raise your score by listening to any DX programme. The number of DX programmes is limited to 6! No particular country limit. Scoring in the same way as in Part 1, maximum point value 100 points for one DX programme.

We wish you good listening!

You can download all the 7 pages from our special website:
www.dswci.org/contest . (Bohac and Wernli)
Posted by Jaisakthivel at 1:37 AM