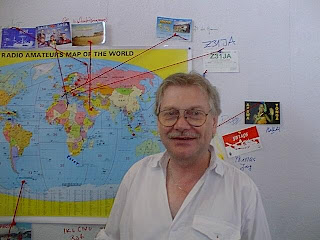 Posted by Jaisakthivel at 2:36 AM

http://www.southgatearc.org/news/february2007/wolfram_hess.htm DARC --- Many of you - especially those of you who remember the former GDR-station Radio Berlin International (RBI), will connect one name with RBI: The name of Wolfram Hess, DL1RXA (ex Y31NO).He was well known within and beyond the borders of the former German Democratic Republic for the only totally unpolitical program on RBI - the DX-program! Some of you may even know his late DX-Programme in English on the External Service of the re-united Germany Deutsche Welle.It is with great personal sadness that I have today received the message of Wolfram's death.Wolfram was nationally and internationally known for his many studies and results in solar physics and being an outstanding expert in Sun and Ionosphere Weather Reports and forecasts. Often he beat the Boulder, Colorado Institute's solar weather predictions with even greater accuracy.Since the late 50s, one could hear Wolfram's voice on air - on Amateur Radio (ex Y31NO) as well as on broadcasting. Wolfram spoke the English interval signal of the former GDR External Station Radio Berlin International (RBI). On RBI Wolfram produced the only entirely unpolitical programm which continued as 'DX Aktuell' in the re-united German Radio World until Dec 31st, 1993.Thanks to this virtuous and totally fascinating radio program and his tremendous personal motivation, I managed to get my first Amateur Radio Call Sign in June 1993 - the suffix RBI was, without any doubt, an honor and a joy for me to get! Still today, I hold this suffix with pride and respect for Wolfram's deeds. This is also a personal obituary: A very last 55, 73 and 76 as well as a final ?dididit dadidah? to you, Wolfram!Wolfram Heߠdied on February 9th, 2007 at the age of 67 as the result of a stroke. 73s, Dennis DL7RBI DARC International Affairs Committee(via Mike Terry, dxldyg via DXLD) OBIT> Wolfram spoke the English interval signal of the former> GDR External Station Radio Berlin International (RBI).And much more English narration, in the GDR days even leading to jokes about an omnipresence of PR films with his voice on the Leipzig trade fair ("auf der Leipziger Messe h?man ?l nur Hesse"). He had continued this work until now. > On RBI Wolfram produced the only entirely unpolitical> programm which continued as 'DX Aktuell' in the re-united> German Radio World until Dec 31st, 1993.Here I have to disagree. Such programs are not unpolitical, especially in cases were they are supposed to be unpolitical since in those cases many topics will be taboo. I still remember how in 1994 somebody had send in an item about CRI running a competition about Tibet: It made it on air only with a "but beware, this is propaganda" comment.And DX Aktuell continued, as I already mentioned, after the merger of Deutschlandsender Kultur and RIAS to the new Deutschlandradio Berlin until September 1994, with the very last programme being edition #191 on Sep 30. Not even the slot for DX Aktuell did change for these further nine months (Fridays 10-11 PM on 177 kHz, towards the end even expanded by another quarter hour, devoted to satellite broadcasting news that were updated for the repeat on Monday morning).Btw, DX Aktuell was disputed by parts of the German DX / shortwave listeners / whatever-you-may-call-it scene. This dispute is still documented at http://www.asamnet.de/~bienerhj/0177.htmlIn my perception there were lots of unrestricted applause and various statements that the programme is entirely scrap, but almost nothing in between, as far as the shortwave scene is concerned. Towards the end also other people appeared in the followship, and I think it would have been interesting to see the outcome, especially with so much airtime available (75 minutes!). But we will never know, because "such a programme has no place on a cultural station, it is obsolete for all times", as a certain gentleman put it when acting as the station's bloodhound on this matter.If somebody wishes to send condolences: You could mail them to me (or just post them here) for being forwarded to Wolfram's relatives (Kai Ludwig, Germany, Feb 17, dxldyg via DX LISTENING DIGEST) OBIT. Source:http://www.w4uvh.net/dxlatest.txt

TIME TO SAY GOODBYE --- SILENT KEY - WOLFRAM HESS, DL1RXA and DK0DXWolfram suffered an apoplectic stroke and died on February 9th, 2007; just before the very last broadcast of Ham radio and SWL hobby program "World DX Meeting" on Deutsche Welle's English service mailbox program on February 25/26, 2007.Started his occupational career as hobby program presenter on former GDR external service "Radio Berlin International". After the collapse of the eastern block he was well known as presenter of "DX Aktuell" hobby program on Deutschland Radio Berlin broadcaster [former RIAS Berlin]. And was too, well known as "Sunspot Cycle and HF broadcast condition prediction 'Pope'" in the ham radio scene in Germany and and beyond. Listen to some DWL World DX Meeting programmes in .mp3 or .ra format: http://www.dw-world.de/dw/0,2142,9542,00.htmlclick to: Current Solar and Ionospheric Weather Reportand you will see a photo picture of Wolfram. 73 wb df5sx (Wolfgang B?, dx_india via DXLD)[quoting previous DXLD about playing ``Time to Say Goodbye``] Viz.:Wolfram, DL1RXA, ist am 9. Februar an der Folge eines Schlaganfalls verstorben, das wurde erst jetzt bekannt. OM Wolfram hat sich als Autor von hervorragenden Funkwettervorhersagen und intelligent-amuesanten Veroeffentlichungen ueber die Grundlagen des Funkwetters einen Namen gemacht. Auf besonders einmalige Weise hat er taeglich auch den Sonnen- und Ionosphaerenwetterbericht fuer den DARC e.V. erarbeitet und die Funkamateure in Deutschland aktuell informiert.(via Harald Kuhl, A-DX Feb 14 via Wolfgang B?, dx_india via DXLD)On a phone conversation we had just three weeks ago Wolfram said in regard to the World DX Meeting that "this will be the last DX I ever made in my life". There has to be a connection.His domestic broadcasting activities are presumably not so widely known outside Germany, so here's a summary:The run of the DX Aktuell show started one day in autumn 1990 when Wolfram found Alfred Eichhorn, the editor-in-chief of Radio Aktuell (the former Radio DDR 1) in a tape editing room. They talked about possible new programmes, Wolfram brought up the idea of a DX show, and so the first edition of DX Aktuell went out via the mediumwave frequencies of Radio Aktuell only a few days later. In spring 1991 all these mediumwave transmitters (including the 1000 kW on 783) were shut down and DX Aktuell moved to 177. By the end of 1991 The Facility (i.e. what used to be GDR radio) ceased to exist but the Deutschlandsender Kultur network continued on some kind of temporary status ("on behalf of ARD and ZDF"), and so DX Aktuell continued as well, but only after some dramatic confusion about the 177 transmitter (it was supposed to go dark altogether but finally 177 stayed on air via the K?s Wusterhausen 100 kW aux until finally the Zehlendorf transmitter had been reactivated with reduced power). It was basically the amount of listeners` mail that kept the programme alive for the following years. DX Aktuell also continued beyond yearend 1993, when Deutschlandsender Kultur merged with RIAS Berlin to the new Deutschlandradio Berlin, but finally came to an end in September 1994 together with a number of other former DS and RIAS programmes. This time listeners` mail was no longer of interest for the "decision makers", a meanwhile well-known phenomenon.For some time there was also a separate "DX-Report" on RIAS Berlin (855, 6005, FM Groߥr Waldstein 89.3 only), founded after complaints from listeners about poor reception of 177 in some areas of Germany. It was a separate show only because RIAS refused to simply relay the Deutschlandsender Kultur programme, simply because this was stuff from the former enemy's station.Here are pictures of a DX Aktuell production at Deutschlandradio Berlin, posted on this site because it so happened that the former RIAS 2 live studio had been used for this purpose:http://www.radiotreff.de/rias2/rias2_sehen_funkhaus_innen.htmA recording of the last DX Aktuell program from the Nalepastraߥ radiohouse, on Dec 31 1993 at 10 PM, just two hours before Deutschlandradio Kultur closed down altogether:http://www.radioeins.de/meta/sendungen/apparat/050820_A1.ramA reproduction of a special QSL card, showing the DX Aktuell authors behind the console of studio K1 (where these programmes were produced from 1990 til 1993) can be seen athttp://www.asamnet.de/~bienerhj/0177.htmlAlso spoken by Wolfram Heߺ The opener of what was then a DX show, launched by DT64 when they were forced off FM ...http://www.radioeins.de/meta/sendungen/apparat/070210_A1.ramI have to add that DX Aktuell was especially valuable for bringing people in touch with each other. On the sad occasion of the very last edition I met somebody I would have otherwise never met due to perceived or real barriers, and this turned out to be decisive for me. I have also to add that during the last months, even just the last weeks, there were first signs of a trend that this programme could become much more than a "mere" DX show, a trend that had no chance to develop further here (in fact such a development happened with the above mentioned DT64 programme, the result received an award just yesterday).Here is the DARC obituary, with a recording of Wolfram's last ham radio read-out just 12 days ago:http://www.darc.de/user-cgi/user.pl?Aktion=langtext&Key=878(Kai Ludwig, Feb 14, dxldyg via DX LISTENING DIGEST) OBIT
Posted by Jaisakthivel at 2:09 AM