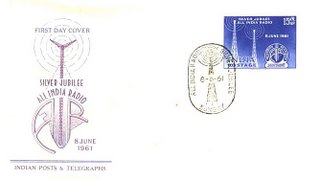 Indian Posts and Telegraphs published the First Day Cover for All India Radio Silver Jubilee Celebrations on 8 June 1961. Here is the Stamp for your view.
Thanks to www.swlcs.de/philatelie/paurein.html
Posted by Jaisakthivel at 11:06 PM

Sangean to introduce 'first DRM Radio' in Europe this October

After a long wait, a major manufacturer has at last announced plans to release what it calls 'the first DRM Radio' in Europe in October 2006.

The DRM-40 will have DRM coverage on longwave, mediumwave and shortwave. It will also have DAB coverage, which Sangean describes as “the digital alternative for the FM band.”

We think this is actually a misleading description, as the DRM Consortium is working on extending the DRM specification to include the current FM band, whereas DAB uses much higher frequencies. The radio will have RDS, according to Sangean. There’s also a USB connection and an SD-card slot, meaning that the radio can play and record MP3 files. 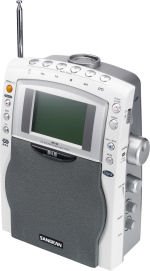 The recommended retail price in Europe, including VAT, will be 299 euros. The website gives the following capsule summary of the features:

RM / DAB Band III / FM / AM / LW / SW
RDS, AMSS and Radio text or DLS
MP3 Playback and recording on SD
Humane wake System on Radio or Buzzer Alarm
12 Alarm Settings
Timed recording
Clock with Auto Update
EPG, Pause Plus, SPDIF and Key Lock
6 Presets for each Waveband
with SD slot and USB connection
with SAI und USB connection
with RF-antenna and BAR Antenna
Audio Out and headphone Connection
With AC-adapter / operates also on DC (Batteries not included)
We hope to acquire and test one of these radios as soon as they become available.

In the UK, this radio will be sold as the Roberts MP40.
It’s not clear if there are any differences in the specification.
Some years ago the boss of Sangean visited Radio Netherlands, and at that time he told them that Sangean would make customised versions for any OEM customer ordering a minimum of 500 units.
Posted by Jaisakthivel at 1:05 AM 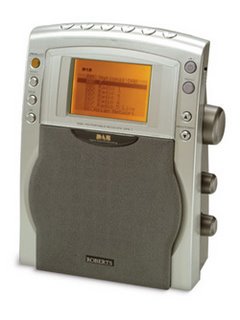 Chennai gets a fourth FM channel

Radio City is targeting a market share of 30 per cent of the FM radio market, which is estimated to be Rs 600 crore in the next two years, according to Ms Apurva Purohit, CEO, Radio City.

She was talking to reporters at the launch of Radio City 105.8 FM in Chennai. Ms Purohit said that the company had done extensive research on listeners' preferences and research has shown that most listeners are partial to film music.

The programming would be city-specific with customised Tamil and English programming, reflecting the `true sound of Chennai'. It will also be tying up with the police department for traffic updates.

Ms Purohit said that Radio City would go beyond traffic updates and take up social issues. In Bangalore, for instance, the station campaigns for more car pools to reduce the traffic density on the roads.

Music Broadcast Pvt Ltd, funded by India Value Fund, promotes Radio City, which is present in Mumbai, Delhi, Bangalore, Lucknow and Hyderabad. In the second phase of expansion of FM Radio, Radio City has bagged the licences to broadcast in 16 more cities. Radio stations will open soon in Jaipur, Coimbatore, Visakhapatnam, Pune, Ahmedabad, Surat and Nagpur apart from smaller towns in western India.
++++++++++++++++++
Chennai gets a fourth FM channel, with Radio City at 105.8 MHz. Chennai already has Radio Mirchi 98.30 MHz, Suriyan FM 93.8 MHz and Raibow FM 107.1 MHz as commercial FM stations. Other than this Anna University (90.4 MHz), Loyola (90.8MHz), MOP Vaishnava(91.2 MHz) colleges too have their FM channels, though I haven't listened to any of them.

Radio City was originally promoted by STAR, and now is owned by Music Broadcast Pvt Ltd, part of GW Capital which bought out STAR's stake.
(http://chennai.metblogs.com/archives
/2006/07/radio_city_enters_chennai.phtml)
++++++++++++++++++
She was speaking to media persons after the launch of Radio City, here, yesterday. Actor Surya lit the traditional lamp to mark the inauguration of India's first and leading FM radio brand.

Radio City will soon be launched in 16 more cities in the country. Apart from music, Radio City will air programmes on current affairs and plans to take up take up social initiatives like the campaign against plastics started by Radio City Lucknow.

'All our RJ's are college students or those who just passed out from college. The young people will surely find it interesting to talk to them', Apurva added. 'Namma City namma life', is the essence and spirit of radio city.
(newstodaynet.com/11jul/rf1.htm)
Posted by Jaisakthivel at 12:36 AM