All India Radio Shillong has re-launched its website on 18th Nov with
a snazzy new design, have a look at :

[Alokesh Gupta, New Delhi, Via DX India]
Posted by Jaisakthivel at 1:08 AM

Dear Radio Friends,
Thank you very much for your great actions.
Radio Japan has arranged my interview next Thursday,
and will air on September 30th, Sunday and will be repeated
on October 6, Saturday in the English program called "Fiends around the World".
hosted by Ms. Kay Fujimoto and Mr. Mick Corlis. Duration: 20 min.
You can hear by inernet at
http://www3.nhk.or.jp/nhkworld/english/radio/program/index.html
Or you can also listen by radio
at 0500 UTC on 6110(Canada), 5975UK, 11970(France)
at 1000 UTC on 9695 SNG, 9625 Yamata,
at 1200 UTC on 9695 SNG, 6120 Canada,
at 1300 UTC on 15735 UZB,
at 1400 UTC on 15735 UZB
at 1800 UTC on 15720 MDG
Please send your report to Radio Japan after you listen to the program.
Listeners response is very important.
JSWC will issue a special 60th anniversary QSL.
Please send your report to
jswcqsl@live.jp   for eQSL.
For printed QSL please send your report to
JSWC, P.O.Box 44, Kamakura 248-8691.
This may take some time.
Enclosure of 1IRC or 2 US dollar is requested for
return postage.
Thank you again for your actions.
Toshi Ohtake,
JSWC.

Posted by Jaisakthivel at 10:38 PM

Community radio gets complete waiver from any fee payment

The government's generosity comes after an intense push by the Information
& Broadcasting ministry, which felt that the community radio was a very
effective medium to make government's "development agenda" reach to the
people.

Community radio may get a new lease of life
http://timesofindia.indiatimes.com/india/Community-radio-may-get-a-new-lease-of-life/articleshow/16483200.cms

Posted by Jaisakthivel at 12:03 AM

Workshop on Amateur Radio at Trivandrum on 10 Oct 2012

In association with
National Institute of Amateur Radio
Hyderabad
http://www.niar.org

Posted by Jaisakthivel at 10:30 PM

On the basis of the recommendations of GoM, the Cabinet has given its
approval for the following in order to improve the overall financial
management of Prasar Bharati (PB):-

i. During the next five years from 2012-13 to 2016-17, Government non- Plan
support will be made available to PB for meeting 100 per cent expenses
towards salary and salary related expenses. All other operating expenses to
be borne by PB out of internal revenue earnings.

iii. Accumulated interest on loan-in-perpetuity, interest on capital loan
and penal interest thereon payable by PB to Government will be waived off.

iv. Loan-in-perpetuity and capital loans provided to PB will be converted
into grants-in-aid.

vi. Property and Assets will be transferred on book value to PB as per
provisions of Section 16(a) of the Prasar Bharati Act, 1990. Normal
accounting principles will be followed to determine their future value; and

vii. Director General of Audit, Central Revenues (DGACR) will continue to
be the nodal auditor of PB and will be assisted by qualified commercial
audit staff for the audit of the annual accounts.

The Prasar Bharati (PB), the Public Broadcaster in the country, has been
grappling with various financial and human resource/employee issues since
its inception, which have adversely affected its functioning as an
autonomous organization. In view of the problems being faced by PB, a GoM
was constituted under the Chairmanship of the Hon'ble Home Minister on 7th
March, 2006 to examine the issues of PB. The GoM was again reconstituted on
21.2.2011 which considered PB's future revenue earning potential given its
public service broadcasting mandate, and made a number of recommendations
for making PB a financially viable and sustainable organization.

India's first 1000 KW DRM Super Power Transmitter of AIR dedicated to Nation in Gujarat
India's first 1000 Kilo Watt Digital Radio Mondiale-DRM Super Power Transmitter-of All India Radio has been dedicated to the Nation at Liyare village in Jamnagar district in Gujarat today.
Speaking on this occasion, Mr.Jawahar Sircar, Chief Executive Officer of Prasar Bharati has said that All India Radio is going to install DRM digital technology transmitters at other Stations very soon. He said that this Super Power Transmitter of DRM Technology at Jamnagar will also help to spread the India's rich culture to our neighboring countries.
Inaugurating the newly commissioned Super Power Transmitters at the Liyare village of Jamnagar, Member of Parliament Mr. Vikram Madam expressed his gratitude for fulfilling the long pending demand of this border region of Gujarat.
Our Correspondent reports the Super Power Transmitter with DRM technology is capable of broadcasting in DRM, AM and simulcast modes which is the first of its kind in the country. The entire project was completed at the total cost of 42 crore rupees.
Three brand new solid state transmitters of 400 kW of S7HP model made by Thomson Broadcast of France is capable of pumping out 1200 kilo Watt power has been installed here this year by Engineers from France along with their counterparts from All India Radio.
Our Correspondent adds that it is a Relay Station used by Urdu, Sindhi and Baluchi programs of AIR External Services beamed to nearby Pakistan,Afghanistan, Iran and some other Gulf countries in North West direction. The frequency is 1071 kHz for AM mode and 1080 kHz for DRM mode.
During tests, Urdu Service and Vividh Bharati programs are being broadcast.
Sep 10
Source : http://newsonair.nic.in/news.asp?cat=National&id=NN6567&bigger=bigger
[Alokesh Gupta, New Delhi, Via DX India YG]
Posted by Jaisakthivel at 3:30 AM

ISLAMABAD: The PPP government is under pressure to sell at throwaway prices the 370 acres of state-owned land, worth Rs50 billion, on the main GT Road in Rawalpindi to some of its favourites.

Owned by the Radio Pakistan, the land is in a prime location and there are reports of some influential persons pressing the top rulers to get the land for their commercial purposes but at throwaway prices.

Director General Radio Pakistan, Murtaza Solangi, when approached confirmed that some influential people had their eyes on this land but he assured saying, "I will not let this happen during my tenure.

"I will not allow this to happen during my incumbency, and if anything is done to achieve this objective, I will quickly resign,"� Murtaza Solangi said, adding, "I will work out on policies and projects so that this land remains in the ownership of Radio Pakistan and powerful persons could not even snatch it in future, after my departure."
�
The background of the story is that the Radio Pakistan management has decided to shut down 5 shortwave (SW) transmitters installed at HTP Rawat with immediate effect. These transmitters installed over a vast area of about 370 acres of land to transmit Radio Pakistan signals to the outside world including South East Asia, Gulf, Middle East, Europe and some other parts. The Radio Pakistan "Pakistan Broadcasting Corporation (PBC)" management is doing so to shift external services on internet and subsequently on satellite.

The staff members of PBC are of the view that short wave receivers are common across the world while everybody especially the rural and some of the urban population do not have internet or satellite receivers in their radio sets. They view that Radio Pakistan's SW installations are a strategic asset, which send Pakistan's message to the whole world and complete elimination of this infrastructure will be a great loss for Pakistan.

The PBC staff members said that the SW installation was not maintained on regular basis and thus there were some problems which could be removed by properly updating and overhauling the installed equipment and at a very low cost. These staff members also say that installed equipment is worth billions of rupees and will be sold for peanuts now.
�
However, on the other side, DG PBC, Murtaza Solangi is of the view that SW analogue technology is becoming redundant now and installed SW equipment has almost become outdated. He said this system consumed very big amount of electricity and yielded almost no results in return and thus remained unfeasible in a country which is already facing power shortages.
�
"We have to move to the advanced technology and our engineering department has worked out and researched before moving this proposal,"� Solangi said."According to our estimates, after removing SW technology, even if we will lose some overseas listeners we will also get more on internet and satellite technology,"� Solangi said and added that one out of these five transmitters will be retained as it was installed in near past and has the capacity to radiate signals in digital mode when we switch digital broadcasts.

He said that there would be problems in India, Bangladesh and Sri Lanka as there were listeners who would not have satellite receivers. "For India, we have strong medium-wave transmitters and can transmit our signals throughout India,"� Solangi said, adding: "For Bangladesh and Sri Lanka we are planning programme adjustment with broadcasters operating there."

The staff of Radio Pakistan showed this correspondent some communications of persons from Western Europe complaining about the frequency of SW transmitters of Radio Pakistan and, according to these members of PBC, these complaints had been resolved. According to them this shows interest of people from other countries in broadcasts of PBC and seeking information from Pakistan. However, DG Solangi was of the view that even such complaints from foreigners had diminished now.
�
Solangi said that during his four-year tenure as DG PBC, he had not sold even a single inch of Radio Pakistan land and same would be the case in the remaining part of his tenure. He said he would take every possible measure to ensure that even in future no one could dare to dole out this land to any influential person so that it could be retained as a national asset.
�
http://www.thenews.com.pk/Todays-News-2-130518-PPP-hawks-eyeing-Rs50-billion-Radio-Pakistan-land

Broadcasting its first program on the 19th of August 1962, the channel is now on air for four hours per day for the Spanish speaking audience around the world through diverse platforms such as shortwave radio, the Internet and FM radio.

To mark the occasion, a special program on K-Pop was broadcast on the 18th and 19th of August. First part of the program, entitled 'Love for Korea in Seven Shades', followed two girls from Mexico and Costa Rica visiting and experiencing Korea, while the second part was a chart show of the most popular K-Pop numbers in the Spanish speaking region.

KBS World Radio, broadcasts in eleven languages and serves as the window of Korean culture and entertainment content for the audiences of the world. 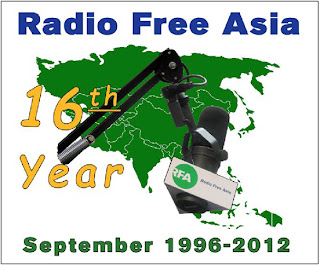 Radio Free Asia (RFA) announces the release of our 16th anniversary QSL card. RFA’s first broadcast was in Mandarin on September 29, 1996 at 2100 UTC.Acting as a substitute for indigenous free media, RFA concentrates its coverage on events occurring in and/or affecting the countries to which it broadcasts. Those countries are: Burma, Cambodia, Laos, North Korea, Peoples Republic of China, and Vietnam. The design was chosen the favorite over four others posted on our Facebook page, RFA QSL. The microphone and flag is typical of what our broadcasters use in our Washington DC studios.This card will be used to confirm all valid reception reports from September 1 – December 31, 2012.  (AJ Janitschek Radio Free Asia )

Posted by Jaisakthivel at 10:25 PM